Ong Kok Hai is an educationist, a scientist, an entrepeneur and a very humble humanitarian.  Highly esteemed by his peers and NGOs,  he has contributed vastly in the field of science and selflessly in the community till today. He is fondly known as Prof Ong Kok Hai.

He has been appointed as an Honorary Member of Malaysian Invention and Design Society (MINDS) and also awarded as one of the ‘Notable Malaysian Inventors’ for his contribution to public health internationally. Prof Ong Kok Hai even has a Wikipedia profile!

Prof Ong Kok Hai retired as an IMU Professor in 2019. As a dedicated humanitarian, he started Rainbow Bridge Malaysia in 2019 without second thoughts to help communities in need.  The NGO has its own healthcare team to provide free treatment and its own Food Bank which provides frozen chicken and fresh eggs to 20 welfare homes, >80% of which are children’s homes. He relentlessly seeks other philanthropists to actively contribute to these homes as well. 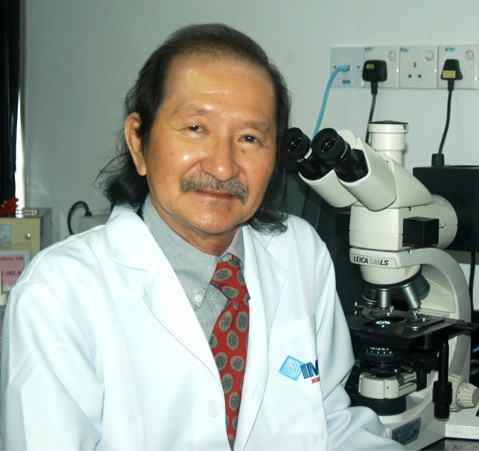 Prof Ong Kok Hai is an educationist, a scientist, an entrepeneur and a very humble humanitarian.

As an entrepreneur, he started Bio-Ti International Sdn Bhd in 2006 and formulated a range of skincare products specifically for acne, acne scars, pigmentation and hair growth under the “infinite” brand. Due to personal commitments, the skincare which received well reviews, however, was not marketed in a large scale.

He could not hide his passion to share his formulation which helped so many individuals locally and internationally regain their confidence and was very discerning in his search for a partner to continue his legacy. At the beginning of 2021, he reconnected with his ex-student at Rainbow Bridge Malaysia. They teamed up  to revive and improved upon his skincare products with new ingredients, contributions of clinical  knowledge and market needs. This new collaboration of strong scientific and medical experiences has resulted in the “Sq-infinit⁺” range – an improved solution for common skin problems in the 21st century.

All prices in Malaysian Ringgit (RM / MYR). All price above will subject to Malaysia Service Tax at 6% commencing 1 September 2018. The information contained on this website is for general information purposes only. The information is provided by SQ Infinit⁺ and while we endeavour to keep the information up to date and correct as much as possible. When you visit or interact with our sites, services, applications, tools or messaging, we or our authorised service providers may use cookies, web beacons, and other similar technologies for storing information to help provide you with a better, faster and safer experience and for advertising purposes.